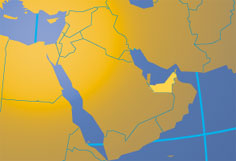 Seated portrait of Wilfred Thesiger taken during his party's journey from the As Saruq sands to Abu Dhabi near the end of his second journey across the Empty Quarter (Rub' al Khali). Wilfred Thesiger crouches on the side of a sand ridge, leaning on a camel stick in his right hand and resting his other hand on his knee. He wears a headscarf, a patterned loincloth, and a long shirt (thobe). Behind him is a ridge of small bushes.

Research Notes - "We left Liwa on March 7th. Abu Dhabi was still a hundred and fifty miles away, but now we had a guide. We were very tired, and were no longer sustained by the struggle to survive, so each day's march became a plodding weariness during which we were inclined to quarrel over trifles. It rained at intervals during these days, sometimes heavily." Wilfred Thesiger, pp. 243, in Arabian Sands (London, 1959). [AK 25/02/2011]