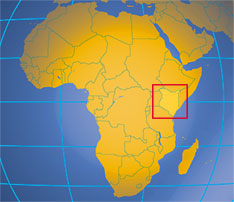 Group of men (named in the original notes as Jacobs, Odunde, Ourio, Gura and Olo). The man to the left, Jacob Odawo, is the same man seen holding the spear of Alego with Archdeacon Walter Owen in another image. A close inspection of his jacket here shows the words 'Native Assessor' embroidered across the front of his jacket. Native Assessors were locals employed to assist colonial magistrates in trials of Africans. [Gilbert Oteyo 9/9/2004 & CM 28/03/2007]

The annotation Jakoko here may be Jacobs or Jakobo as the Luo would pronounce the name. In that case the man at the far left hand would therefore be Jakobo. Gilbert Oteyo visited the surviving wives and relatives of Jacob Odawo during research in March 2007. [Gilbert Oteyo 9/9/2004 & CM 16/04/2007]