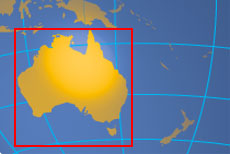 Reconstructed camp scene with painted background. A man lies on the ground, apparently ill, tended by four others and watched by two women. Props include a tripod with a billy can over a fire.

Despite the identification of Kapunda, South Australia, which Henry Balfour has transcribed on the mount below this print, presumably based on information supplied by the Dammann brothers, this image is certainly from Brisbane. A copy for instance can be found in the John Oxley Library there (see Ray Sumner's article in the journal Aboriginal History, 1986 (10:2): p.163). Sumner suggests a dating of c.1868 based on other dates in the John Oxley Library album. The painted backdrop also includes a simple bridge, being the first Brisbane bridge opened in 1865 and which collapsed in 1867. It seems likely that Dammann's source for this photograph was a German who was resident in Queensland between 1865 and 1869 called Julius Ferdinand Berini and who is known to have shared Australian photographs with Dammann in the early 1870s. [CM 13/07/2015]