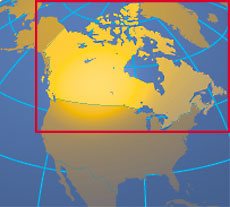 View of the 'Six Nations Reserve wampum belts' and other wampum belts, pictured hanging in front of a board.

Contemporary Publication - This print has been published in Horatio Hale, 'Four Huron Wampum Records: A Study of the Aboriginal American History and Mnemonic Symbols', Journal of the Anthropological Institute, 26 (1897), between pages 220 and 221, plate 13. [PG 06/10/2014]

Research publication - This image has been published in Elisabeth Tooker, 'A Note on the Return of Eleven Wampum Belts to the Six Nations Iroquois Confederacy on Grand River, Canada', Ethnohistory, 45/2 (1998), p.225, figure 3: 'The Six Nations belts. Photograph taken in Brantford, Ontario, 14 September 1871. [...] Horatio Hale, who had this photograph [...] taken, stated that the belts were hung in groups. He was told that the five in the group on the left related to the founding of the league: the long white belt signifies peace, and the smaller ones with diagonal lines signify the four walls of the longhouse, the diagonal lines being the braces of the walls. The four belts near the center refer to the first treaty between the Iroquois and the English. The ninth belt from the left (a Friendship belt) represents the "covenant chain" - an Indian and a white man united by a row of black (purple) wampum beads. The device in the middle of the seventh belt from the left was said to represent a dish of beaver, and the belt itself the record of a treaty between the tribes to share certain hunting and fishing territories. The twelfth belt from the left was given by the Canadian government as confirmation of a treaty. The belt at the bottom of the photograph is half of a belt (the other half was left in New York State) symbolizing the formation of the Iroquois league.' [PG 24/03/2010]