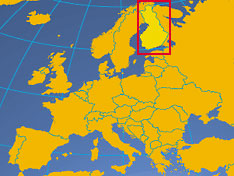 View of a boat in which Arthur Evans' party travelled on the Kitinen river.

Research Notes - It has been established by Philip Grover that this photograph was taken by Arthur Evans between 24 and 26 August 1873, when his party was travelling along the Kitinen river. Evans wrote in his journal of the voyage to Finnish Lapland: 'The shores of the Kittininjoki [Kitinen river] are curious being often as pure sand as a sea beach & this sandy nature of the shore enables the river to mould it as it will [...] The river was very pleasing though the banks are not lofty enough to make it grand. The shores lined with primeval forest - & as evening drew on when the whole surface shone like silver, the contrast between the water & the shadowy firs, & golden sunset, was glorious' (entry dated 24 August 1873): Ashmolean Museum of Art and Archaeology, Sir Arthur Evans Archive, B/2/1, Box 1, Notebook 2, pp.2-3. [PG 28/05/2013]

Research Notes - For more information on Arthur Evans' voyage to Finnish Lapland in 1873, see Joan Evans, Time and Chance: The Story of Arthur Evans and His Forebears (London, 1943), pp.172-176; Ann Brown, Before Knossos...: Arthur Evans's Travels in the Balkans and Crete (Oxford, 1993), pp.14-16, 90; and Tony Lurcock, No Particular Hurry: British Travellers in Finland, 1830-1917 (London, 2013), pp.123-134, 250. A selection of drawings and photographs made by Arthur Evans during the voyage was displayed in 'Travels in Finland and Bosnia-Herzegovina: An Ethnographic Collection of Sir Arthur Evans', exhibition [Archive Case display] curated by Philip Grover, Pitt Rivers Museum, University of Oxford, 29 April to 1 September 2013 (see Related Documents File). [PG 06/06/2013]