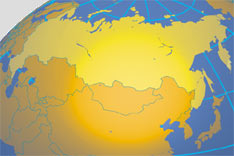 Studio portrait of a Russian woman, sitting, and two children, one of whom she holds on her lap.

Research Notes - This carte de visite has been identified as a photograph by William Carrick, taken from the printed information in Russian and French on the reverse. Carrick's studio is described as being located at '19 petite Morskoi', or No. 19 Malaya Morskaya [literally, '19 Little Morskaya street'], in St. Petersburg. [PG 06/02/2013]